This file contains invisible Unicode characters that may be processed differently from what appears below. If your use case is intentional and legitimate, you can safely ignore this warning. Use the Escape button to reveal hidden characters.

With a simple hand-written LL(1) parser, Unlambda source code can be trivially parsed into AST, which takes the form of a full binary tree, having "apply" operators as internal nodes and primitive functions as leaf nodes. 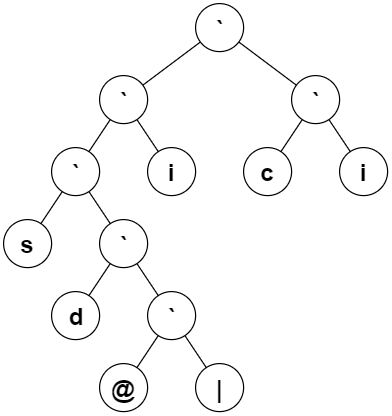 Execution of an Unlambda program is basically a combination of "eval" and "apply" operations. One of the primary goal of compilation is to eliminate "eval", as AST is a static structure and precedence of "apply" operations can be determined at compile-time. However, behavior of "apply" depends on the function and the argument, whose implementation detail should not interest the compiler, are left to the runtime system.

Within a single pre-order traversal, every internal node of Unlambda AST are compiled to 1 or 2 instructions, by following the rules depending on the types of its children, which are shown below (X, Y are primitive functions):

After each (1), continuously pop instructions from the stack and append it to the list of compiled instructions, until one of the following conditions is met:

As you may have noticed, there's an obvious flaw in the said compilation rules - the special behaviour of function d wasn't taken into consideration. According to the Unlambda language specs, whenever an "operator" (the left child of an internal AST node) evaluates to function d, evaluation of the "operand" (its right sibling) is postponed and saved to a "promise", which may evaluate further in the future.

For rule (2), the compiler knows whether X is function d. When it is d, every instruction between the NOP and APP d, acc should be skipped, thus it compiles to DEL offset, where the "offset" points to the instruction next to the APP d, acc. The offset of the instruction next to DEL offset should be stored into the promise, so that the skipped instructions can execute in the future. Meanwhile, APP d, acc will never happen, so we change it into LA and introduce an internal function f ("finalize"), which applies the argument to the element popped from the stack, and restores the instruction pointer it saved. The function f is pushed to the runtime stack whenever the promise is applied to an argument, which should be pushed to the stack beforehand.

For rule (4), the left child may evaluate to d. If not, SA behaves normally (saves accumulator), otherwise, it behaves like DEL, which requires it to take an offset as operand as well.

Rules (1) and (3) are not affected, as there are no evaluations left to postpone, and d can be applied as a normal function.

The following image shows the compilation of the cat program mentioned above: 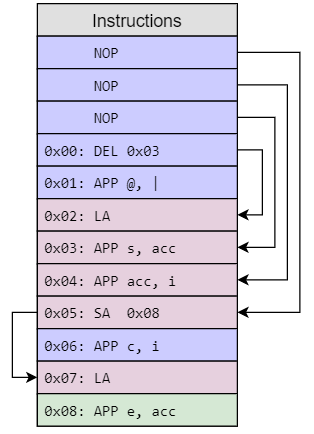 Note that an APP e, acc instruction is appended to the end of program as a guard to explicitly terminate the program upon end of execution.

The ``sXY function differs from any existing Unlambda functions, for it's not applied to its argument directly. Instead, it performs a "substituted application". When ``sXY is applied to function Z, the evaluation result of ``XZ`YZ is returned. Extra evaluation means extra instructions have to be generated. A special code section for "substituted application" is shown below:

When ``sXY is applied to an argument Z, we successively push function j, Z, Y and X into the runtime stack, and set the instruction pointer to the first line of the instructions above. Function j ("jump") is another internal function we introduced, which acts like i, with the side affect of restoring the instruction pointer it stores. Thus, execution can proceed to the main code section after substituted application is completed.

However, result of `XZ may be function d, which postpones the `YZ evaluation. The task of testing the value of U falls to XCH. Unlike the cases in #1.2, where the size of postponed instructions varies, here only 1 instruction can be skipped. Meanwhile, promise is created by popping two elements from the stack, rather than storing pointer to the line of instruction.

Another problem is when `XZ evaluates to another ``sXY function, it will be applied by the LA instruction at 0x03 (similar to a tail call). If done indefinitely, like in ```sii``sii, the stack will be filled with j functions storing the address of 0x04 until memory is exhausted. Those j functions are meant to be consumed by the LA instruction at 0x04, but unfortunately, it exists outside the loop and never gets executed. TCO can be performed at runtime by checking the value of the instruction pointer when applying ``sXY. If it equals to 0x03, do not push j into the stack.

Quite a few compile-time optimizations can be employed to improve runtime performance, which are not limited to the following examples.

Certain Unlambda expressions have constant evaluation results, such as ``kXY (always yields X), and `i`i`ii (evaluates to i). These expressions can be recognized and evaluated at compile-time.

Another notable case is printing strings. In Unlambda, only one character can be printed per .x function call. To perform string printing, chaining of the .x function is required. For example, a program which prints "hello" ( `.o`.l`.l`.e`.hv ) compiles to:

By storing "hello" as a constant, and introducing a p ("print") internal function (which stores the pointer to the string constant and behaves like i with a side affect of printing the string), the instructions can be optimized to:

For an APP instruction with an immediate e as first operand:

The Unlambda VM is a process virtual machine specially designed and optimized for the Unlambda programming language. 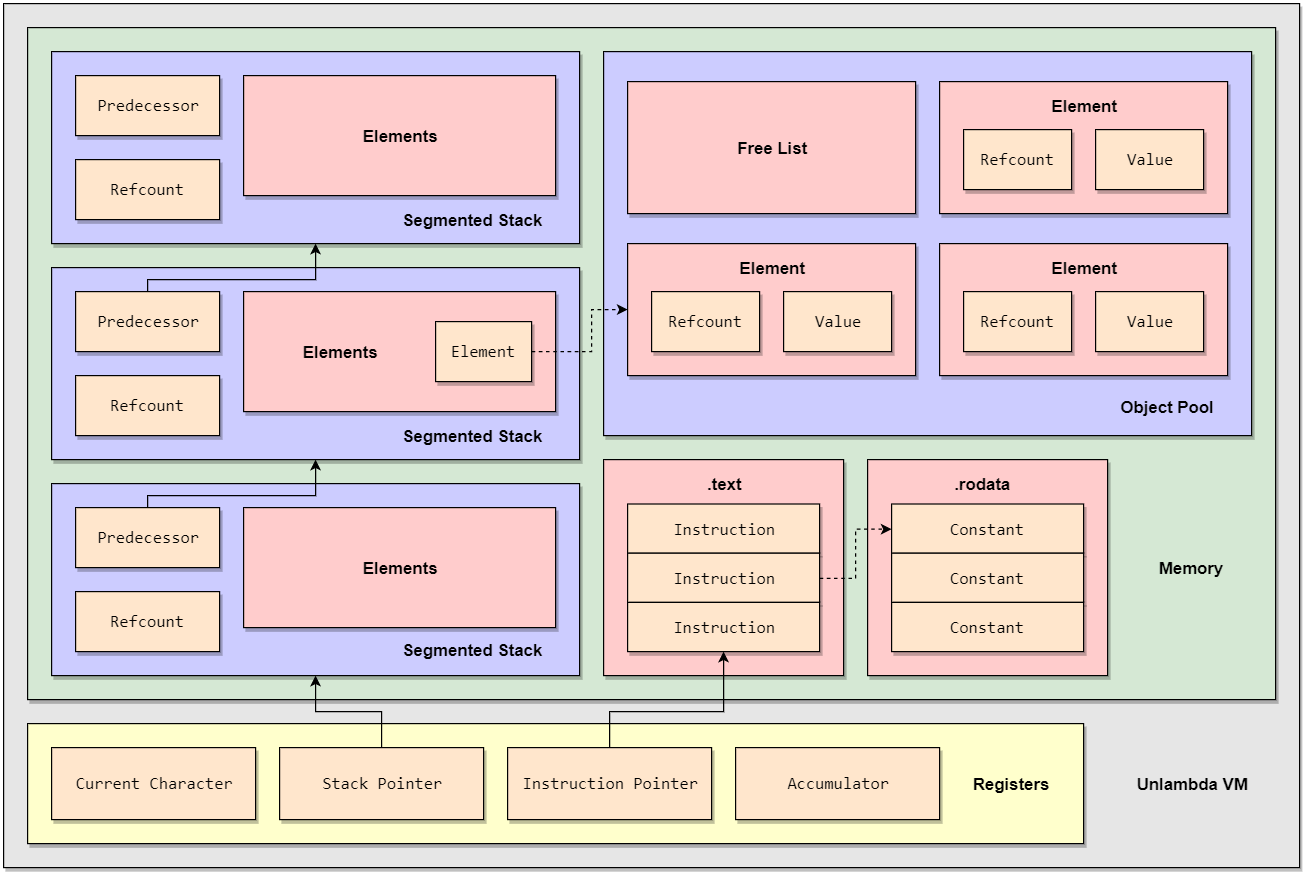 The Unlambda VM utilizes an accumulator-based architecture, having the "accumulator" as the general purpose register, while the other three registers being the instruction pointer, the stack pointer, and the "current character". The "current character" is an Unlambda-specific concept, which is used internally by some primitive I/O functions of Unlambda.

The ".text" and ".rodata" sections, which remain read-only at runtime, are loaded from bytecode file when VM initializes. Instructions are located to the ".text" section, and constants to the ".rodata" section. Although there's no such concept as a "constant" in the Unlambda language itself, there are a few compile-time optimization techniques where constants are required.

Dynamic memory allocation is required when `kX `sX ``sXY functions, promises or continuations are created, to store X Y and pointers. An object pool is introduced, due to inefficiency of frequent malloc()s and free()s of small, fixed-size blocks of memory. Objects in the pool are safely reference counted, for all of them are immutable by design, creating no reference cycles.

The Unlambda VM takes advantage of segmented stacks to lower the overhead of context-switching. During continuation capture and reinstatement, only the "active" stack segment (referenced by the stack pointer) need to be copied/freed, rather than the entire stack. Stack segments are reference counted to employ copy-on-write, and they can be pooled as well to alleviate potential performance degradation caused by the "hot split" issue.

An Unlambda VM instruction consists of an opcode followed by 0 to 2 operands. There are a total of 6 different instructions, which are listed below.

* Note: The XCH instruction is reserved for internal use only, and should never appear in bytecode files.